For the second prototype it made sense to use the SC-614 speech processor from Sensory (ex msp50c614 from Texas Instruments) since it would replace the msp53c691 slave speech processor and the mc68hc908jl3 MCU in the first prototype with one device.

This prototype was initially completed on 29 October 2004 and became the basis for the production model - the S100.

This is the development kit for the second prototype. The white box in the top left-hand corner is the power supply. The green circuit board in the center left is the evaluation board for the speech processor - you can see the processor in the center of that board. From that board, there is a ribbon cable to the board below (board from the first prototype) which contains the flash memory chip. To the right you can see the headphones and above that is a breadboard with pushbutton switches for pause, play, next book, previous book, next chapter, previous chapter, increase volume, decrease volume. 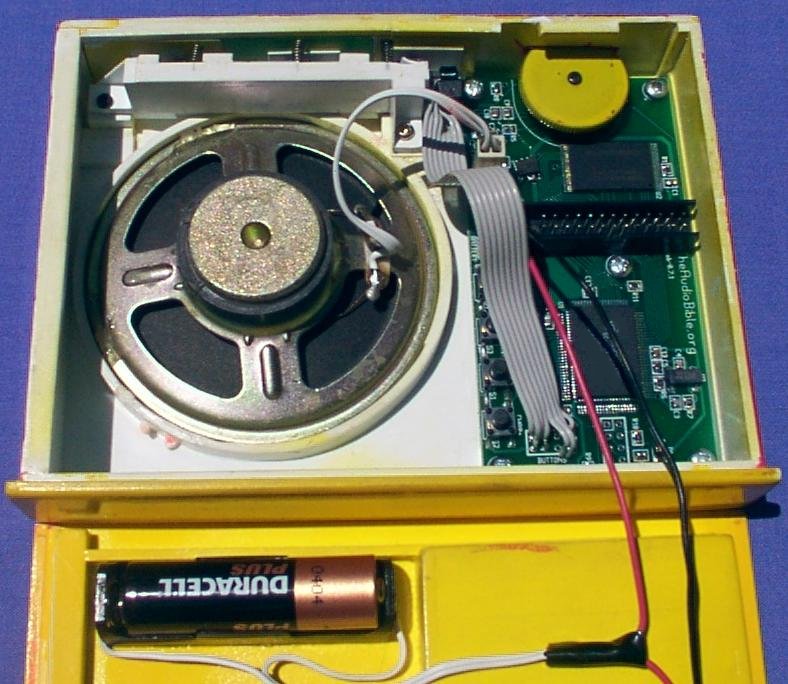 This is the completed second prototype, showing the circuit board, 1/2 Watt speaker, analogue and digital volume control, etc. The large chip near the top of the picture is the flash memory chip that contains the Bible narration and the large chip below that is the speech processor chip. The enclosure was designed and hand-built by Mark Hoekstra of Talking Bibles International.

This was a prototype developed for Christian Outreach Media (COM). It was based on the second prototype, using the SC-614 processor. COM produced a narration of the Zulu Bible (OT + NT) that was

The first prototype portable audio Bible player developed in this ministry used the msp53c691 slave speech processor from Texas Instruments together with a mc68hc908jl3 MCU from Motorola. It was quite crude, as you